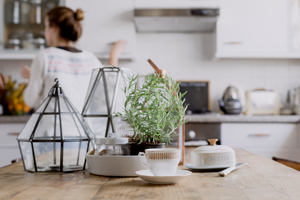 Lyle loves to eat. He writes articles for a popular foodie website in his city, mostly pieces on new restaurants but sometimes just about what he’s decided to cook on his own.

He’s developed a following from his work and his articles always receive the most comments, but some of the feedback isn’t always so positive. Sometimes, it’s even way off topic. Instead of responding to the content of his pieces, a few people use comments section as an opportunity to make fun of him for his profile picture.

Lyle knows he has extra weight, but that doesn’t mean that the comments don’t hurt. And when he’s hurt, he turns to his No. 1 comfort meal: organic mac & cheese, baked beans and two overloaded hot dogs. It’s not nearly as classy as the French eatery on the corner, but it reminds him of his childhood and how his mom would make him a similar meal when he was feeling low. After the meal, however, he often feels worse, and not comforted at all.

Food is meant to sustain us, but it can also hold us back. Just like anything in life, too much of even a very good thing can have devastating results. Even water can eventually cause some serious damage if over-consumed, and not drinking enough at all has it’s own obvious results.

Food is a very intimate thing for many people, so it’s understandable why so many people suffering from eating disorders never verbalize their need for help. It can be a source of shame and sadness, but an even sadder truth than the reality of your struggle is knowing that only a tiny percentage of the millions with a food disorder receive treatment. Thriveworks Marietta Eating Disorder Therapy aims to change that.

Something in your life is out of balance. You might not want to admit that, but it’s true.

Even people who seem to be doing incredibly well have ways they can improve and balance the various aspects of their lives, but they first must acknowledge in the imbalance before any real change can occur.

People with poor body image can sometimes seek extreme measures to achieve an unrealistic physical shape. The modern entertainment and advertising industries are pretty good at implanting the idea that there are only a few acceptable body types, and so we seek to achieve the impossible through impossible means. Those impossible means can take the shape of an eating disorder.

Someone with anorexia will impose extreme eating limitations on themselves, leading to starvation and unhealthy amounts of weight loss. If left untreated, anorexia can be fatal.

People with bulimia will often eat relatively large portions in a single setting – more than the average person would consume under similar circumstances — and the resulting guilt leads them to self-induced vomiting and/or excessive exercise.

Binge eating disorder (BED) is defined by repeated short intervals of time where you eat way more than is necessary. Some people with BED will eat as much as 15,000 calories within a single sitting.

You: I Have An Eating Disorder. I Need Help.

The help you need is only as far away as your willingness to ask for it.”

Thriveworks Marietta, GA Eating Disorder Therapy is here for you. Whatever food imbalance you are currently experiencing, know that it is highly treatable.

Our counselors are not only innovators in the field who have been cited in many trusted publications, but are available to meet with you as soon as today.

We appreciate how difficult it is to reach out for help, which is why we make sure that we’re ready and available for you when you call. We’ll pick up the phone when it rings, and sign you up for a session as soon as possible.

And if your current schedule is crazy (like most people’s), then Thriveworks Marietta Eating Disorder is a great fit. Our clinicians offer extended weekend and evening hours, and some are even available to provide therapy remotely, through our online counseling program.

Call us right now. We’ll pick up. We’ll show you that thriving is possible.

I have know David Cuna both personally and professionally for about 20years.He have many attributes just to name few He has great work ethic, he’s honest, sincere and he is very professional great person to work with and be around, he goes above and beyond to help his patients and everyone around him.

I have know David Cuna both personally and professionally for about 20years.He have many attributes just to name few He has great work ethic, he’s honest, sincere and he is very professional great person to work with and be around, he goes above and beyond to help his patients and everyone around him.