Stop binge-watching, start gaming: Why you should play video games and how to contend with toxic gaming culture

I used to think that adults who play video games regularly were people who couldn’t face reality; man-child troglodytes who retreat into their sweaty lair in order to avoid the sun and going on dates. I’d long shoved video games into a corner of my head, adding to a mental menagerie of things that I like to silently pass judgment on. Yet I have no issue with going home and bingeing an entire TV series over the weekend.

I’m willing to bet I’m not alone in my hypocrisy, either. Compared to the household streaming services (Netflix, Hulu, Disney+) that many of us regularly use, video games and gaming service subscriptions are often viewed as unhealthy and childish time commitments—they’re stigmatized. But video games have been repeatedly shown to have cognitive benefits and may help to reduce our stress levels Americans streamed, on average, nearly eight hours of content per day last year. It’s not like we don’t have time to play video games. So why don’t we?

Regardless of your age or the stereotypes you associate with gaming, maybe it’s time you gave gaming a shot. To be fair, there’s stigma and toxic gaming culture to contend with. But when it’s all said and done, you just might say to hell with it all and trade your Hulu and Netflix subscriptions for a gaming console. I did—and it was definitely worth it. 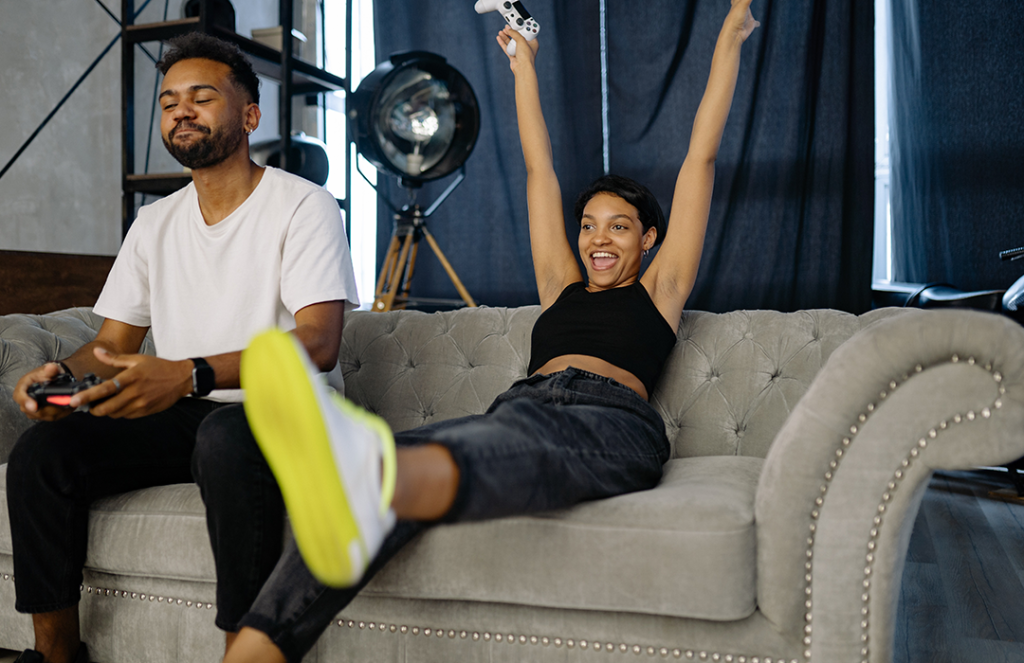 Gaming Is Stigmatized But Not For Long

What stands in the way of many of us actually picking up a controller is our negative perceptions of gamers, and more widely, video games themselves. While affording a console is one thing, many of us purchase a new iPhone without thinking twice. No; the reason that many of us don’t play video games is that we don’t see their value. We may also want to avoid judgment, for either fitting or not fitting the “gamer” stereotype. If gaming were more normalized, then more of us would probably spend our lounge time playing video games instead of watching TV.

But the good news is times are changing. Drew Lightfoot, Licensed Professional Counselor at Thriveworks in Philadelphia, PA, an avid gamer himself, agrees. Lightfoot specializes in treating video game addiction, and he was also a professor of Psychology and Research at La Salle and Wilmington University. “The stigma around video games has drastically shifted over the last 10 years, making video games more mainstream, popular, and normalized,” says Lightfoot. According to statistical data gathered by Limelight in 2019, nearly 65% of people ages 18-45 would rather play video games than surf TV stations or watch a streaming service.

Much of human behavior and our use of technology revolves around human herd mentality, an innate desire to belong and be considered normal by other people. Human herd mentality is a process long observed in psychology—and when it comes to video games, it presents a double-edged sword.

Toxic Gaming Culture: The Dark Side of Playing Online

Playing online with other gamers might cause newcomers to shy away from video games. In online communities, gatekeeping—the process of excluding selected individuals from being accepted into a larger body—runs rampant. Misogynistic and racist mistreatment of female and minority players has been an issue since the existence of gaming chat rooms; the gaming industry’s mostly white male player base is largely to blame. According to Lightfoot, “most gamers will tell you that if they have a recognizable voice while playing video games, either as a woman or minority, they will refuse to talk to others while playing.” Female gamers, in particular, are targeted:

This phenomenon is just a sliver of something known as toxic gaming culture, a phenomenon so common that 80% of all gamers say they’ve experienced some form of verbal or written harassment from other players. Online players may have profile names, but their true identities and faces are often anonymous. Although players can be banned for their harassment or abusive behavior, these comments or actions aren’t always condemned by others. This has served to solidify racist and sexist abuse as tolerated behavior within many online gaming communities.

These types of online communities have given birth to incels: young, single, and sexually frustrated men who often feel ostracized by society and threatened by women and minorities. Several perpetrators of planned mass shootings and violence against women and people of color have been linked to online incel communities in the past several years. Toxic gaming culture and its role as a breeding ground for incels truly is the dark side of gaming, and indeed, of human herd mentality.

Maybe playing online isn’t the best way for non-gamers to start off. But that doesn’t mean you need to completely avoid it either. Lightfoot pointed out that his wife, who is a gamer herself, “regularly leads ‘Ladies Game Nights’ where she and her female friends feel supported and represented enough to be vocal and fully engage.”

If you’re a woman or a person of color, consider playing with other women or people of color to tap into that same support and empowerment Lightfoot’s wife finds, and remember to report harassment and unwanted comments. There’s strength in numbers.

Why You Should Start Gaming, As Told By a Former Non-Gamer

My girlfriend and I got sick of spending the last few hours before bed just watching TV. We were bored with the repetitive nature of most shows and we also wanted another way to connect with each other, too. So we went out on a limb, canceled our streaming services, and bought an Xbox Series S. We still don’t quite know what the hell we’re doing most of the time, but we’re having fun. Here’s why you should consider making the switch, too:

The Gaming Community Is Opening Its Doors

Video games should be for everyone, and objectively speaking, they are. But we’ve held on to our negative views long enough to make gaming seem unappealing to many. And many faceless members of the online gaming community bristle at the thought of inclusivity. But not everyone, according to Lightfoot. He believes in the future of diversity in gaming, musing that “we still have a long way to go in the gaming communities, but as more individuals and companies come to realize that young white men are not the only individuals playing games, we should hopefully see more inclusivity and accurate representation in the [gaming] media.”

For casual gamers like myself, you may never encounter online harassment while playing video games—but it’s still important to understand the real issues that affect the gaming community. Advocacy groups like I Need Diverse Games, GaymerX, Black Girl Gamers, Real Women of Gaming are vocalizing their desire to play without harassment and for their disenfranchisement within the gaming community to end. Their allies? Pro-diversity gamers like Lightfoot, holding the doors of the community open instead of gatekeeping. So move aside incels and toxic gaming culture; make some space for the rest of us.