In late 2010, Steve Jobs was still at the head of Apple and had recently unveiled the first iPad. Jobs was well known for his personality and would often call reporters to let them know how he felt about their reviews. At times, these conversations would involve a pat on the back from Jobs. However, more often than not, the conversation would focus on how the reporter had gotten something wrong or missed a key piece of information.

Nick Bilton of The New York Times was on such a call after pointing out, what were in his mind, shortcomings of the iPad. Now, no one likes to be told what to think. Especially reporters who feel as though someone may be trying to tell them what to write. In an effort to change the subject, Bilton asked Jobs a question he thought would be a softball, but ended up leading him down a path of discovery.

“So, your kids must love the iPad?” asked Bilton. “Oh, they haven’t used it. We limit how much technology our kids use,” replied Jobs. Bilton was understandably shocked. You mean the head of Apple doesn’t let his kids use social media and screens at all times? Not even close. In fact, this led Bilton to a revelation that nearly all “tech giants” limit their own and especially their kids’ time on social media—often platforms they themselves helped create.

Unmonitored and unrestricted screen time and use of social media can have major consequences. The drug of choice today is the phone. Cut with a mixture of Facebook, Instagram, Twitter, Reddit, and other mindless distractions. In many cases (social media platforms especially), habit loops are intentionally built into these products, causing us to treat social media like we would smoking, drinking, picking our nails, or any other nasty habit.

We recently sat down with Dr. Adam Alter, author of Irresistible: The Rise of Addictive Technology and The Business of Keeping Us Hooked. Dr. Alter outlines some of the most common negative effects of unhealthy social media usage and how we can combat them.

You Need To Be Bored

“When you spend a lot of time on your screen and on social media your threshold for boredom declines pretty dramatically,” notes Dr. Alter. “It’s important to be bored occasionally because boredom pushes you to think a little bit differently, a little more divergently, and a little more creatively.” Throughout history, many great minds including Einstein have praised the powers of daydreaming and boredom. This time spent in the subconscious is where we give our brains time to process all the information we’ve had coming in. This is why many people have some of their best ideas in the shower. If you’re stuck on a problem or experiencing writers block, walking away and coming back fresh will often get you through.

Next time you feel boredom creeping in or your mind starts to wander, let it. Don’t give in to your knee jerk reaction to open up Facebook for the tenth time that morning and let your mind go, even if just for a few minutes.

“People who spend a lot of time on screens and social media are less capable of distinguishing emotions. Especially the subtle cues that other people may be giving off to them,” explains Dr. Alter. “Especially kids but also adults. It becomes more difficult for them to interact with others.” Social media allows us to view others as less than people, as profiles. When you spend excessive amounts of time on social media you can begin to numb yourself to the feelings and emotions of those physically interacting with you.

If you want to see the worst of humanity, look no further than the comments section of a popular page on social media. People type incredibly awful things they would never dare say to someone in person. This is because from behind our keyboard we don’t have to see the reactions to what we are saying. The trouble is that over time the line can begin to blur and you can bring this attitude into your interactions with friends and family. Avoiding being sucked into this type of interaction is critical and less time spent dealing with profiles and more time spent with people will keep you emotionally sharp and aware.

Social media addiction not only affects your brain and internal emotions but your physical state as well. For most of us, the ability to produce meaningful work is the key to our survival. We gain the ability to produce something meaningful that others see value in and are willing to pay us for. Producing high quality work depends on our ability to focus when it counts, and social media platforms do all they can to interrupt this focus. “You’re working and then all of a sudden you get a notification, an invitation to interact. This pulls you away from the task at hand and as a result you’re never really in the zone of maximum productivity,” explains Dr. Alter.

Many employers have blocked social media sites on their servers for this exact reason. Your mental energy is drained by each distraction no matter how small in your daily life. Allowing yourself to check Facebook each time it calls out to you is a surefire way to zap your productivity and it’s only a matter of time until your boss or customers begin to notice.

Your Physical Health and Self-Esteem

“Another terrible consequence is physical,” notes Dr. Alter. “Many of us are spending a lot of time without exercise, without spending any time outdoors because we’re spending all of our time on social media attached to screens.” The level of happiness you experience in your life can be directly correlated to the amount of time you spend moving. Being outdoors helps us relax, burn fat, and tap into our subconscious.

Social media also intentionally shows us the best sides of those we follow, the sides they want us to see. It is far too easy to begin to see oneself as inadequate or lesser when all we see are the best sides of others—ignoring the pain, humility, and real life experiences that bring us closer together as a species. Finding yourself stuck inside eating junk food while impulsively scrolling through pages of supermodels is a direct path to low self-esteem.

It’s important to also realize that it’s not entirely your fault you spend too much time on these apps. The companies that build this technology consulted experts to find the easiest ways to get you hooked. Dr. Alter recommends you fight technology with technology. Using apps such as Moment can help you begin to track where you are spending most of your screen time each day. Other apps such as SelfControl can shut you out of certain apps and websites altogether for periods of time, effectively acting as your own personal gatekeeper preventing wasted time.

Excessive social media use is unhealthy for you. Period. The good news is that avoiding this habit can lead to incredible benefits and help you stand out in the crowd of those who choose to live with their face in a screen.

*This article was written by Austin Fabel, producer of The Science of Success podcast.* 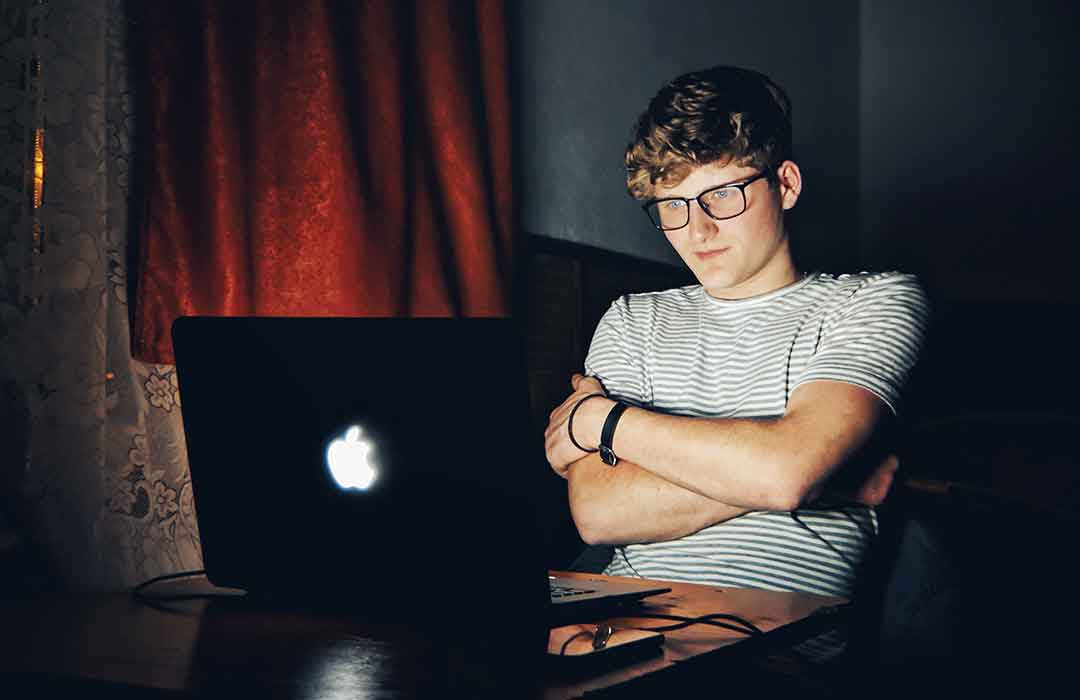 What’s the Cost of Keeping Up With Today’s News?

The News Can Bring About Unwanted Anxiety

When Social Media Makes You Sad

Healthy vs. Unhealthy Social Media Use: What’s the Difference?