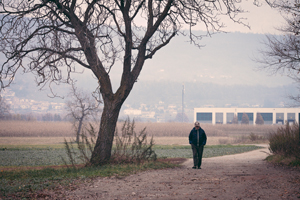 It seems to happen every year. Steven jokingly refers to his lower moods during the winter months as an allergy to the holiday season and all that comes with it: the ubiquitous Christmas music, the decorations and all the shopping that advertisements everywhere tell him he should be doing.

He might joke about his feelings during the holidays, but there are times when it’s not such a joke. He looks at his life and the results of his labors up to this point, and can’t help but think that he’s not accomplished much and probably never will. He binge-watches a few series on Netflix, but instead of feeling entertained he feels drained and guilty for not using his time better. His work productivity is down, which leads to further negative self-talk and increased feelings of worthlessness.

Steven is struggling with seasonal affective disorder, yet has never so much as heard the term before. Speaking with a caring and knowledgeable counselor could be exactly what he needs to work through the effects of these challenging mood issues.

What is Seasonal Affective Disorder?

The cold and especially the lack of sun can take a toll on one’s mood. In fact, for many, the “winter blues” are a real problem, called seasonal affective disorder (SAD). Those with SAD often present similarly to those with major depressive disorder (MDD), the only difference being that SAD is cyclical and tied to the seasons whereas MDD is not.

The incidence of SAD affects people in all climates but is more prevalent northern climates. In Michigan, those with SAD report sleeping an average of 2.5 hours more in winter than in the summer, because the general population sleeps 0.7 hours more in the winter.

An estimated 6 percent of the population experiences full-blown Seasonal Affective Disorder and an additional 10 to 20 percent experience a milder form. The incidence of S.A.D. increases as the latitude increases ranging from 1.4 percent in Florida to 10.2 percent in the northernmost states.

Some with SAD feel the onset as early as August and others are fine until January, but typically symptoms of SAD begin in October or November and subside in March or April.

The most common symptoms of SAD include:

Sufferers find that SAD affects productivity in work or school, interpersonal relationships and causes a marked loss of interest or pleasure in most activities.

1. Decreased Daylight:
Research indicates that SAD is caused by the decreased light in winter – due to shortened days as well as increased cloud cover. (TIP: Research sunlight hours for your state and region to get a better understanding of what might be triggering your depressed mood.)

2. Melatonin Deregulation:
The pineal gland, located in the middle of the brain, responds to darkness by secreting melatonin, which in turn induces sleep. Researchers believe that for some, the long winter days cause melatonin production to go astray. This deregulation disrupts the sleep-wake cycle and leaves sufferers to experience non-restful sleep at night and fatigue during the day.

3. Being Female:
Women tend to be more susceptible to SAD than are men. This finding may simply be a gender-bias, as men are traditionally and culturally encouraged to ignore symptoms, or it could be due to hormonal differences between men and women.

4. Biological Clock (Circadian Rhythms) Changes:
Everyone has an internal biological clock that regulates a number bodily functions including the sleep-wake cycle. People with SAD appear to have less consistency in their circadian rhythms, and even moderate changes in this cycle can disrupt our mood.

5. Decreased Serotonin Levels:
Serotonin is one of the many neurotransmitters that help to regulate mood and appetite. People with SAD have been found to have lower concentrations of serotonin activity during winter months.

6. Pre-existing Conditions:
Those already suffering from depression, bipolar disorder or anxiety are more likely to experience an increase in symptoms consistent with SAD than those without a history of a mood or anxiety disorder.

7. Family History:
There is a genetic link and those with a family history of mood and anxiety disorders, particularly SAD, are more likely to suffer from symptoms of SAD.

Treatment: What do I do if I think I have SAD?

The good news is that effective treatment exists.
Some things you can do to help alleviate the symptoms of SAD include:

If you believe you have SAD, it’s important to get an accurate diagnosis. Symptoms often overlap or mimic more chronic conditions including major depressive disorder and bipolar disorder, which may not respond, or even be exacerbated by some of the treatments used for SAD. Light therapy, for example, is often not useful for those experiencing a major depressive episode and can, in rare cases, can trigger a manic episode in those with bipolar disorder.

If you’re not ready to speak with a counselor or therapist, at least consider speaking with your medical care provider who can help you rule out any physical reasons for your mood issues.

A professional counselor, however, has the knowledge and experience you need to help combat SAD. It may be possible that you don’t have SAD at all. In any case, an appropriate diagnosis for what you’re going through is a great first step toward overcoming these challenges.

The fact of the matter is that if you’re experiencing difficulty completing tasks because depressed moods, it’s time to do something about it. Help is out there, you just have to reach for it.

Click here to see a listing of Thriveworks Counseling locations by state, or discover how online counseling can meet your needs.

Words by Marcy Adams Sznewajs, a National Certified Counselor licensed in the state of Michigan and president of Thriveworks Birmingham Counseling. A version of this piece also appeared in the Birmingham Eccentric.