Nicotine-containing products, alongside caffeinated beverages like coffee, are some of the most commonly used psychoactive substances in the U.S.—though we rarely think of them as drugs. Even though tobacco and nicotine use has steadily dropped in the U.S. since 2005, many of us know someone who smokes, chews, or uses nicotine products. And in some cases, regular users can develop a condition known as tobacco use disorder.

As Kate Hanselman, PMHNP at Thriveworks explains, “tobacco use disorder is a mental health diagnosis that is made when an individual’s tobacco/nicotine use causes significant impairment or distress.” Nicotine is the addictive chemical found in cigarettes, cigars, chewing tobacco, snuff, and other tobacco products. Besides causing dependency, nicotine has many negative physical effects and a variety of withdrawal symptoms.

The addictive nature of nicotine makes quitting smoking, vaping, or chewing forms of tobacco difficult. Hanselman also notes that “nicotine is highly addictive, and can lead individuals to experience dependence, tolerance, and significant difficulty quitting, often over multiple attempts.” However, quitting can be easier with the help of a substance use therapist, a behavioral therapist, or a qualified psychiatric provider. 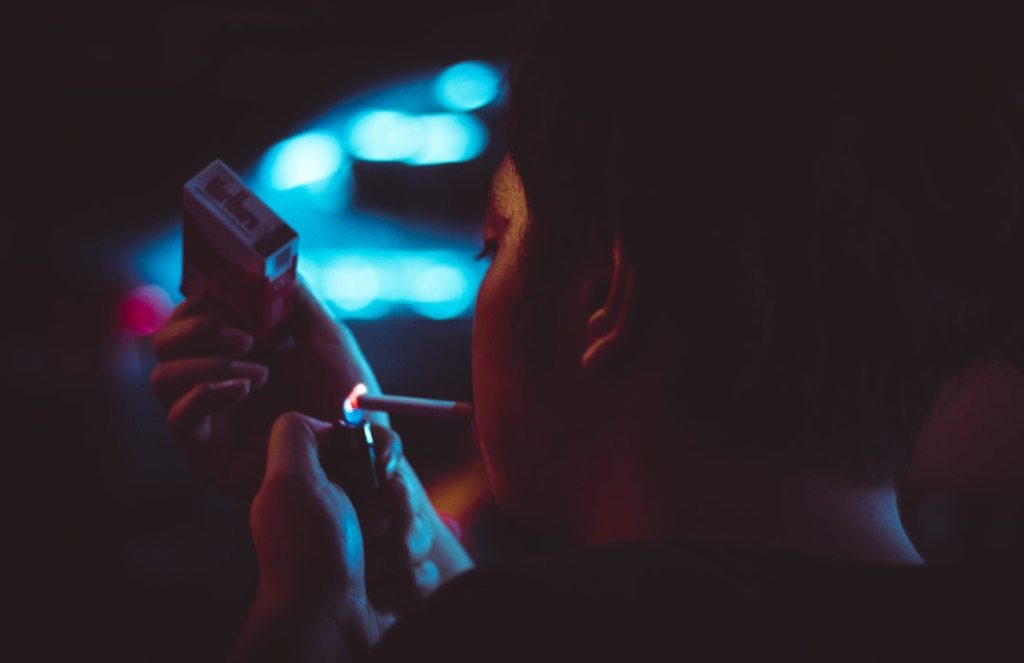 What Are the DSM-5 Criteria for Tobacco Use Disorder?

The DSM-5 defines tobacco use disorder as a “problematic pattern of tobacco use leading to clinically significant impairment or distress, as manifested by at least two of the following, occurring within a 12-month period.”

When an individual uses tobacco for more than a year and a minimum of two of the following sub-features appear, the disorder is diagnosed. Symptoms of tobacco use may entail:

The severity of someone’s dependence on tobacco may vary significantly, depending on how long they’ve been using, how often they use, and how disruptive their habit is to other aspects of daily life.

How Is Tobacco Use Disorder Categorized?

The disorder is separated into three categories—mild, moderate, and severe. If between two and three symptoms from the criteria exist, the individual’s tobacco use disorder is considered mild.

According to the DSM-5, some of the risk factors for developing the disorder include:

Other at-risk groups include those with a family history of nicotine addiction and substance use.

What Are the Effects of Tobacco Use Disorder?

Besides nicotine addiction, the effects of tobacco use disorder can possibly include:

Tobacco use disorder is a condition that highlights the disruptive and addictive effects of nicotine consumption. Those with tobacco use disorder will often smoke within 30 minutes of waking up, and may even wake up at night to smoke.

What Is Tobacco Withdrawal?

These symptoms will spike in the first several days after last using nicotine and gradually fade within 30 days (but can last longer) as the individual’s dependence on nicotine is reduced. A mental health professional may add the following to the diagnosis, including the individual’s remission timeline:

Health Risks of Tobacco Use

Tobacco causes many risks to a person’s health, including:

There are also numerous other risks related to tobacco, including:

Also not to be discounted is the risk that tobacco smoke poses to the health of others. Because smoke from cigarettes is composed of toxic chemicals, such as arsenic, cyanide, tar, and nicotine, secondhand smoke can be a serious health issue for those living or working in close proximity to the smoker.

Cigarettes are the most commonly used of all tobacco products and account for 90% of all tobacco use in the U.S. By the time they are 18 years old, approximately 20% of young adults in the U.S. will use cigarettes every month. Many of them will become smokers on a daily basis. The DSM-5 also points out that:

Interestingly, people who chew tobacco and use snuff account for less than five percent of tobacco users in the U.S.

Can Tobacco Change Your Personality?

Tobacco may not directly affect someone’s personality, but nicotine affects the brain’s reward system, hijacking it in a certain sense.

This can result in a personality change of sorts. Nicotine usage has also been shown to decrease neuroplasticity, and decrease the number of neurons in the brain, along with altering the brain’s structure. Over long periods of time (likely decades), these changes could result in cognitive decline that causes personality changes.

How Do You Control a Tobacco Addiction?

The most effective way to control one’s tobacco addiction is to stop using all forms of tobacco—and more specifically, nicotine. Products like nicotine pens and vaporizers may not contain tobacco (and initially appear safer than traditional forms of tobacco use) but are still addictive.

Some people switch from smoking or chewing to using nicotine gum in order to wean themselves off of the chemical. Tapering off one’s nicotine supply can be an easier, less punishing form of quitting.

Some individuals may find it easy to quit on their own. But for other people, having the help of a mental health professional can make the process easier.

What Is the Treatment for Tobacco Use Disorder?

There are an assortment of methods that can help people successfully quit using tobacco products. Cognitive behavioral therapy (CBT), in particular, can help the individual stay committed to cessation. Acceptance and commitment therapy (ACT), along with motivational interviewing (MI) can also be effective treatments.

A therapist can work with individuals to help them identify other healthier habits that will help replace the “feel good” effects of smoking. The right therapist will also assist them in dealing with their cravings for nicotine. And as the client and therapist move forward as a team, they’ll work to identify the triggers that drive the individual to want to use tobacco.

In other circumstances, a psychiatric provider can help provide the former smoker with a prescription medication that helps alleviate the withdrawals associated with nicotine cravings.

In addition to these treatment options, some people may find solace in support groups for smokers who are trying to quit. Having the empathy and encouragement of an entire group, rather than a single individual, may make quitting easier for those suffering from tobacco use disorder.