Ring and Nextdoor: The good, the bad, and the gossip associated with neighborhood watch platforms

Buena Vista is as nice a neighborhood as you could imagine: Proper houses trimmed in white, all lined up in neat rows. It’s a labyrinth of new pavement and landscaping, baking underneath the Texas sun. Somewhere, the sounds of a lawnmower swirl together with a dog barking and a child’s laughter; the grill sizzles in the background. Adjusting in a lawn chair, iced sweet tea rattles in my hand, and beads of condensation glide down the bottom of the glass. Welcome to the ‘burbs, where all is well. At least, on the surface, anyway.

Don’t get me wrong: The Vista is an upgrade over the overpriced studio in Austin, TX, only three months prior; I’d been clawing at the chance to escape the city life and find a way to slow down. But I still feel uneasy here, and there’s an unacknowledged tension that seems heavier than the humidity. My feelings only intensified after receiving a mysterious letter in the mail. The letter was addressed to my house by a neighbor named Sandy who recommended that we join Nextdoor, a neighborhood watch platform for “us neighbors” to keep in touch.

So, not wanting to let Sandy down, I signed up. And quickly, I realized the Vista’s unnatural state of quiet wasn’t just me being used to the sounds of traffic. The tension I’d felt had an outlet—on Nextdoor. Sure, there are nice posts, like ones that recommend which Whataburger has the best drive-thru after church on Sunday. But the juicy bits, the really popular posts are usually related to community gossip and trash talk and vague descriptions of suspected package thieves.

Neighbors by Ring and Next Door, plus other neighborhood watch platforms, have a lot of potential for good. It’s beneficial to be safe and informed about what’s going on around us. But instead of contributing to community gossip and paranoia, we should take steps to make these platforms a little more neighborly. That might be what we have to do, as well—because if you drive through the suburbs, you won’t be able to hear the sounds of our 21st-century calamities and building social anxiety. But you can read all about them on Neighbors by Ring and Nextdoor. 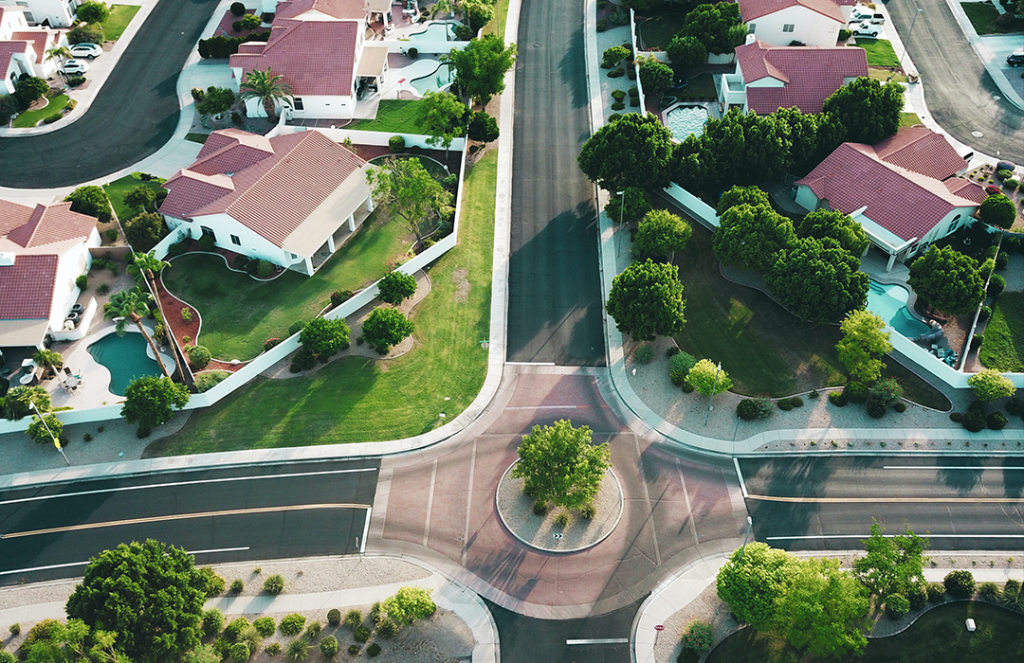 A Way to Check in with Neighbors or Avoid Them?

Last winter, during the infamous snowstorm that hit Texas, my partner and I were forced to shelter in place with a close friend at his house. Unable to drive home, we spent nearly a week there without electricity and running water, powering our devices with solar chargers, while boiling snow to cook, drink, and flush toilets with. In the meantime, our friend kept our waning spirits high by reading funny, often heartwarming messages from his neighbors on Neighbors by Ring.

During the storm, he and some of his neighbors were able to check in on each other using the app. The snow kept us all from driving, but it definitely wasn’t stopping anyone from going and actually knocking on their neighbor’s door to see if they were okay. The app seemed like a way to engage with neighbors, without having all the potential awkwardness and tension that comes with physical interactions.

The long-running debate over whether our favorite apps are hurting our social lives or not never stops. Still, with online platforms, we can speak more freely and without the repercussions of saying something inflammatory in person. This emboldens many people on social media, who often take things too far, which became obvious when those heartwarming messages became overshadowed by lengthy complaints about neighbors and passersby.

Research does indicate that when it comes to social interactions, we often prefer to engage virtually as opposed to in-person, often to the point that we start to devalue real interactions. And digital platforms, Ring and Nextdoor included, make it easier to say what we want without the normal repercussions that might come along with saying it in person.

Neighborhood watch apps and programs can help keep a community safe, but when they’re used as the sole form of communication between households, no one knows what’s actually going on in the outside world. And when paranoia builds, suburbanites are likely to grossly exaggerate their area’s crime rates—but in reality, these numbers have been falling across the country for years. Though frequent reports of crime in our own neighborhoods may justify ignoring these statistics, Ring and Nextdoor communities may also stereotype people of color and the homeless as package pirates or perpetrators of other crimes, often without any evidence.

Be a Better Nextdoor Neighbor

There’s no need to ditch Ring or Nextdoor; from my experience, apart from the stereotyping and community gossip, it can be a great way to learn more about your neighborhood and who’s in it. With that in mind, here are a few guidelines to help you be a better Nextdoor neighbor:

Ring and Nextdoor highlight problematic societal issues like racial discrimination and a lack of empathy for the homeless, but they also give us a deeper look into the widespread paranoia that pervades suburban life. A paranoia that seems to question whether every manicured lawn, white picket fence, and dining room table is protected by fear.  But while you’re doomscrolling through your neighborhood’s newsfeed, try to remember that face-to-face interactions can’t be beaten, and they often allow us to form deeper connections with others. Ring and Nextdoor might make us feel like we’re connected, but the benefits aren’t the same.

As for living in harmony with our neighbors, that’s easier said than done. I’ve had my fair share of packages stolen over the years. Someone is always going to start up their lawnmower at 6 AM. And for some inexplicable reason, that one guy down the street really loves blasting his trance music at 1 AM, and somehow, we are all okay with that. I definitely don’t always understand my neighborhood, but from my perspective, it’s better to sit back and sip the tea than to spill it.