On the surface, the fitness guru you follow is inspirational—but they’re also driving unhealthy, relentless exercising into some of their followers. What about the diet teas or fizz drinks that everyone is drinking (according to the influencers you follow) in order to lose weight? How about the waist trainers they promote that get you the perfect hourglass figure? Or what about the brands they partner with that don’t offer size-inclusive options?

Are these influencers actually creating a harmful environment for people with pre-existing body dysmorphia and/or eating disorders?

Instagram, YouTube, Facebook, Snapchat, TikTok. It seems like everywhere you look, there’s an influencer on your social media feed pushing the latest fashion trends, diets, and exercises. The influencers you follow might be on the smaller side with less than 15 thousand followers; or, they might be on the larger side with a massive following of nearly 200 million people, like Kylie Jenner. Either way, the ideals these influencers are promoting often lead to unhealthy thoughts and behaviors—sometimes, they even lead to the development of an eating disorder.

The Epitome of Influencers Promoting Negative Images: The Kardashian-Jenners

The average young adult in the United States will spend an average of three hours a day on social media. Over the course of a year, that’s the equivalent of nearly 46 days. Spending this much time online, especially for younger, impressionable eyes, can have some negative side effects. For example, many of us know the Kardashian-Jenner women and even keep tabs on their social media accounts. They flood our feeds with pictures of their newest outfits, products, and paid sponsorships. They’re big players in the world of influencing and are known for promoting products to make you more “desirable” like detox teas and waist trainers to help you “snap back” quicker after pregnancy.

“These women are not promoting health, they’re promoting a worrying obsession with their appearance, and the idea that there’s a shortcut to ‘achieving’ a body like theirs. These posts are damaging to the mental health and self-esteem of many of their followers—most of whom are young women—and exploiting their insecurities,” explains Rachel Hosie, a writer for Independent, on just one of the harmful products the Kardashian-Jenner family showcases on their social media accounts.

This family is full of well-known women who have a massive impact on our society and culture, making everything they do and say a topic worth talking about. The Kardashian and Jenner women are not strangers to promoting harmful products and often pave the way for other influencers. For years we have seen pills, teas, waist trainers, creams, and more. There’s a striking difference between an ad promoting an inclusive clothing line or makeup brand and an ad that promotes being thinner or a new way to alter your physical state.

Influencers and social media will continue to play a role in promoting body image issues as long as we continue to allow unrealistic standards to rule our thinking. Instead, they should start promoting brands that send a message of inclusivity and become advocates of self-love and acceptance. While this may take some time and a lot of changes, all we can do in the meantime is continue to build each other up and talk about the importance of celebrating all body types.

A term that has been popping up more recently is body dysmorphia or digitized dysmorphia. Body dysmorphic disorder (BDD) causes people to become overly concerned with flaws in their appearance. In turn, it can make going out into social situations challenging and cause feelings of anxiety. People with BBD might invest in cosmetic procedures to “fix” the flaws they think they have. While these procedures might temporarily fix the negative feelings, the anxiety is likely to return.

Body dysmorphia can be exasperated by social media influencers who seemingly have the “perfect” bodies. However, it’s common for these influencers to use photo editing software and pose specifically to obtain the body they want to project online. For followers and viewers who don’t know this, they feel like they aren’t good enough, or attractive enough, to be on the level of their favorite online influencers.

People with this disorder might fixate on their hair length or thickness, their skin and complexion, the size of their nose, acne and complexion, muscle size and tone, and figure shape. Symptoms and signs of body dysmorphic disorder include:

By no means do social media influencers want to influence the development of eating disorders or negative body image in their followers. But, without realizing it, they contribute to a societal expectation that men and women should look a certain way. Unfortunately, pressure to be thin, cultural preference for thinness, and exposure to media promoting these ideals can lead to the development of eating disorders.

Kacy Amory, a criminology doctoral student at the University of South Florida—specializing in gender and crime, social media use, and online victimization—explains that social media accessibility is making matters worse. “Those who use these platforms are constantly faced with a plethora of content which pushes more traditional values of what men and women ‘should’ look like,” she says.

“No matter how unrealistic and harmful, these norms are ingrained in us from an early age, even if they exist as an unconscious bias for many who claim to be more progressive. Therefore, influencers who use social media to gather followers are highlighting certain body types, looks, and other materialistic things as what is needed to receive attention or popularity, and it’s all fed by traditional gender norms we are taught growing up.”

The two most common types of eating disorders include:

Getting Help for Eating Disorders and Body Dysmorphic Disorder

If you or someone you know is battling an eating disorder or body dysmorphic disorder, it’s essential to get the proper mental health help. Therapists and psychologists are trained in properly diagnosing these types of disorders and providing the appropriate care and treatment for them. Different therapies, such as cognitive behavioral therapy, can be used in the treatment of eating disorders. Therapists can develop a treatment plan based on your needs to help you develop a positive self-image, proper eating habits, and more.

People Online Do Not Define Your Worth

When everything you do is online, it can be hard to avoid the triggers that cause you to look down on yourself. Actively unfollow accounts that do not promote body positivity or inclusivity and take much-needed breaks from social media when you’re feeling overwhelmed.

Amory advises those who are feeling down about their appearance to remember that the social media influencer you’re idolizing doesn’t even look like the person in the photos. She also stresses the importance of remembering what true self-worth is: “Even those who we idealize have flaws and things they may not like about their body; you are not alone in those feelings. But, it is important to remember that your self-worth is not tied to your body size or body image; you should surround yourself by content online (and in person) that remind you that you are valuable and you are worthy, regardless of how you look.” 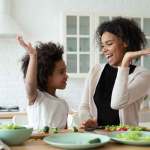 Madison Bambini is a Communications Coordinator at Thriveworks. She received her bachelor’s degree from VCU in mass communications, focusing on digital journalism and broadcast journalism. She also minored in gender, sexuality, and women’s studies. Coupled with her love for writing, Madison enjoys producing content that is inclusive, empowering, and promotes the importance of mental health.

What is binge-eating? When does it become a problem? Do I need help?
Lenora KM
5 min read

Does my friend have an eating disorder? If you’re concerned about a friend’s eating habits, educate yourself and be compassionate when opening up about your suspicions
Dr. Tarra Bates-Duford
3 min read
No comments yet
Disclaimer