Advice for dating a roommate: Cohabitant hookups and the proximity principle

My roommate is extremely attractive and I’m starting to feel an emotional connection. Would it be a humongous mistake to hook up?

This is a tricky question. Fortunately, I’m abundantly qualified to answer it because I’m currently raising a kindergartner with my former roommate. Essentially he and I never stopped being roommates after we met in a Brooklyn brownstone one fateful day, long ago. In time we got the new roommate, who can be a bit of a princess and never contributes to the grocery bills. Now our new roommate wants a cat, but our current landlord doesn’t allow pets. And I don’t know if emotional support animals can be assigned to five-year-olds? But I digress. Here are the facts you need to consider before you start hooking up with your roommate. 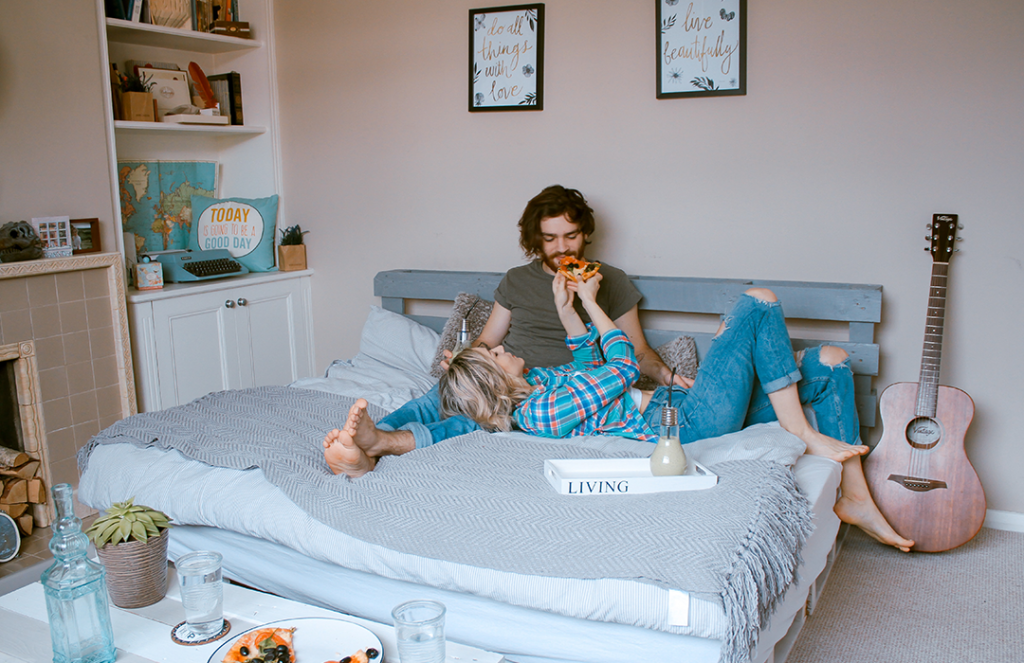 Why Roommate Sex Is Complicated

First, are you looking for sex, or something more? Is your attractive roommate looking for sex, or something more? Maybe you don’t have clarity on these questions yet so you just want to dive in and figure it out as you go. Not wise, my friend. Usually you’re not supposed to Define the Relationship (DTR) until you’ve been together for a minute, gathering intelligence. But if you think you’re emotionally mature enough to hook up with your roommate—one of the biggest intimacy landmines out there—then you’re mature enough to DTR before anyone makes a first move.

And that’s a difficult conversation. Case in point: Let’s say that Roommate A is starting to develop actual feelings for Roommate B. Roommate A wants to see where those feelings will go, but they don’t feel that they can make an emotional evaluation until they let their sexual chemistry with B play out. But A doesn’t want to be stupid and mess up a good living situation (washer/dryer!!!!) by hooking up with their roommate. They also don’t want to be vulnerable and ask B in advance if they might potentially want more than sex. What if B says they’re not interested in anything deeper?

Then things are awkward and hurtful. At this point A can either 1) Bury their feelings, hook up with B anyway, and hope the two roomies eventually fall in love; or 2) Share a bathroom with someone who preemptively broke their heart.

The whole situation just makes a person cringe. In fact, WIF, it’s pretty much inevitable that you and your roommate are going to handle this badly. Don’t hate the player, hate the game. But here are some guidelines for dipping into these shark-infested waters.

The Dos and Don’ts of Roommate Hookups

1) Be aware of psychological biases.

There’s a positive correlation between the time people spend together and the extent to which they’re attracted to each other. This is called the proximity principle. Over 40% of long-term partners meet at school, work, church, or a local restaurant/bar. It seems obvious that people who regularly interact and/or live close to each other would be more likely to develop relationships, but modern digital life broadens the “nearby” dating pool. People can now evaluate thousands of potential partners, both far and near, on their computers, expanding the definition of what social psychologists call functional distance.

The proximity principle is similar to the mere exposure effect, which describes the phenomenon wherein humans prefer things and other people that are familiar to them.

Lastly, a famous 1932 study showed that one third of all married couples in Philadelphia lived within five blocks of each other before marriage. The author wrote up the study in a paper entitled “Residential Propinquity as a Factor in Marriage Selection”. Propinquity refers to the physical or psychological closeness between people. According to social scientists, greater propinquity leads to greater attraction.

2) Reckon with your naivete.

This might sound ageist, but the person you lust for in your early 20s is probably not going to be your dream partner in your 30s. That’s not to say that everyone in their early 20s has poor romantic judgment, but experience matters. So if you haven’t been in a lot of relationships and you find yourself attracted to one of the first roommates in your independent adult life, be on your guard. You don’t want to throw away a positive living situation for a youthful fling.

3) Consider your other roommates.

If you’re living in a house or apartment with multiple people, your relationship with one of them is going to affect everyone. You’re messing with your other roommates’ domestic security as well, so be respectful.

4) Have an exit strategy.

Before you’re even tempted to fall into your roommate’s arms, make a plan for what you’ll do if things go sour. Are you willing to move out? Will it be prohibitively expensive or practically impossible to find a new place to live? If your relationship ends badly, you have to be willing to give up your home if you no longer feel psychologically safe there.

5) Set boundaries from the beginning.

Carve out alone time. Have meals by yourself when you feel like it. Netflix-and-chill solo when you feel called to power down like an overheated battery. Just because you live with someone doesn’t mean you have to spend every waking moment together. You still deserve privacy, spells of solitude, and time with friends. Your roommate needs to recognize that a closed door is a closed door, even if you’ve swapped fluids and utilities.

Are you settling for the most convenient partner? Are you too lazy to mingle in the wild? Do you want comfort sex with a friend? Do you have social anxiety and find it easier to be with your housemate than go on another online date? Be mindful of the origins of your desire before you make an irrevocable decision.

Protect Your Home, Heart, and Finances

If you’re not persuaded at this point that roommate sex is more trouble than it’s worth, then you and your dishwashing associate might have a chance. Just remember to tread lightly and consider the consequences. The demise of a roommate love affair isn’t unlike the fallout of any romantic entanglement that doesn’t result in decades of domestic bliss. Adult relationships don’t always work out, and at their conclusion someone typically has to find another job, move out, convert to a new religion, or relocate to Mars to avoid their ex.

Sometimes the experience merits the uprooting. Sometimes it doesn’t. But you’ll never know until you try. So WIF, if you feel a real connection with this person and you follow my guidelines above, you have my blessing. Just don’t start a tumultuous relationship toward the end of the month, before your roommate pays their share of the rent.