I know a decent amount of people who would pay a pretty penny for some solid relationship advice—they’re dying for a formula that would solve all their problems and explain how happy couples are, well, so happy.

Unfortunately, I can’t provide this formula… nor do I believe it exists. But I do have a few secrets to share:

Dr. Fran Walfish, leading child, family, and couples Psychotherapist, gave Thriveworks the inside scoop on how happy couples maintain their happy relationships. And as it turns out, it’s not so impossible after all! Every given relationship has its distinct dynamics, demands, and challenges—all of which can make or break it. But we need not forget the most important factor: our very treatment of the relationship and of each other. Dr. Fran Walfish explains this further in these 7 principles that she says happy couples abide by:

1) They accept and even embrace their differences.

“All couples are made with two different people,” explains Dr. Fran Walfish. “No two people in the world are just alike. And, after working with hundreds of couples, I’m convinced opposites often do attract. But, great couples learn to build upon those differences. They build upon each other’s strengths and let each other minimize their weaknesses. ‘Two are better than one’—the author of Ecclesiastes says—and great couples live this truth.”

2) They confide in each other.

According to Dr. Fran Walfish, happy, healthy couples, “keep no secrets. There are no hidden issues among great couples. They are vulnerable with each other. Both partners open themselves up to the other person completely.”

3) They deal respectfully with minor annoyances.

“Can we just be honest? People do stuff that gets on our nerves at times. That’s true of all of us—even with the people or especially with the people we love the most,” she says. “Great couples have learned not to let those little things distract from the major things, like love and commitment.”

4) They serve each other.

“There are no 50-50 splits of responsibility in a great relationship,” says Dr. Fran Walfish. “Great couples learn to sacrificially serve one another. In the best relationships, it would be difficult to judge who serves one another more. There may be times one gives 100%, because the other can’t give anything. And there are other times the other spouse gives 100%. And neither complains when it’s their turn to give all.”

5) They support each other.

According to Dr. Fran Walfish, happy couples also, “publicly support each other. Great couples are supportive of each other in public. They don’t tear each other down, and they handle private issues in private.”

6) They prioritize their time together.

Simply put, “great couples spend time together.” She goes on to explain that, “life is busy for all of us. These couples schedule time together. They find things to do that each of them enjoys. And they say no to other things that would keep them from having adequate time together.” 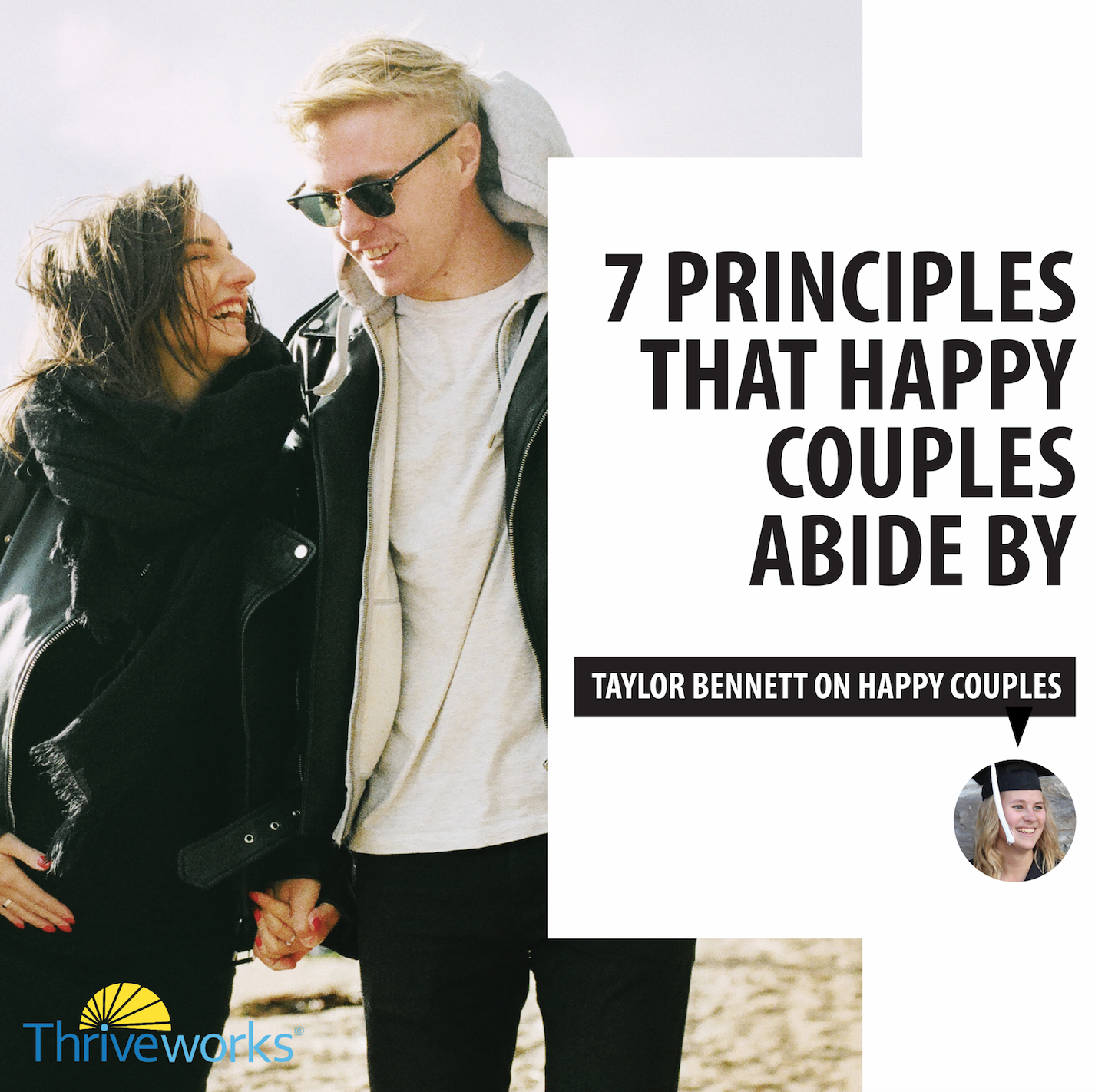 7 Principles that Happy Couples Abide By

7) They cater to their independent needs.

Happy couples take special time for themselves, according to Dr. Fran Walfish. “Take 10-15 minutes each day to be with yourself and chill. You’d be surprised how challenging this is when you have a spouse and children tugging at you 24/7. Give yourself short, undivided, positive attention each day to nourish and fortify you.”

Online Counseling Question: How can you deal with stress at work during COVID-19? (Video)

Online Counseling Question: How do I stop being jealous and insecure in my relationship? (Video)

Online Counseling Question: How can I find my purpose in life during COVID-19? (Video)