What Stops You From Succeeding? Violins and Water Pumps…

Have you ever poured your whole self day after day into achieving a dream or goal only to realize, when you look back on it, that you have accomplished nearly nothing? I have for sure, and that moment of realization is far from pleasant. There have been plenty of goals in my past that I’ve worked at, sometimes with incredible intensity. Yet these dreams I poured into didn’t always yield the results I was aiming for. This seems obvious of course, but looking back on these things made me start wondering what made the difference between my successful endeavors and my fruitless ones.
I think this example will help to paint the picture.

I used to play the violin. Well, to be honest, when I put the bow onto the strings I was well capable of producing sound, but it was typically a less than pleasant experience for those within earshot. I played for about 9 years of my life, and yet I never really got very good at it. There would be times I was incredibly excited and passionate about the prospect of being able to produce enjoyable music from the instrument. I even remember a time I was pretending to play the air violin while humming the star wars theme song to the movement of my imaginary bow. Nerdy…I know. I remember at that moment sitting on my top bunk bed as a kid, flailing away on my invisible violin, that my older sister happened to walk in. I was so embarrassed! I was deeply invested early on, but eventually over time I actually became highly disinterested. As I mentioned, I wasn’t seeing the results I thought I would be; which was quite discouraging. In the end, I completely gave up on it, and the violin is sitting in a closet somewhere in my house collecting dust. I never achieved what I had imagined I would as a child… at least as it related to the violin. Do I regret it? Not really, but there is something to be learned from the experience of “failing”.

The violin story is just an example from my own life where something I was very much into at a point culminated in a disappointing result. I’d imagine you have similar stories of things you wanted to achieve and were passionate about pursuing that ended up fizzling out to nothing or significantly less than you first imagined. So what’s the deal? Why does that happen? There are plenty of reasons that I didn’t realize my ambitions with the violin for sure. People could argue that I didn’t have the talent for it, or maybe that I didn’t really want the result bad enough, or perhaps that I let the negative emotions resulting from my older siblings picking on me lead me to set the violin aside to protect my fragile ego. I’m sure there’s some truth to each of those things. Now I want to focus on how, in spite of those obstacles, I could have realized the result I imagined as a kid. Remember, I didn’t want to be a world class performer. I just wanted to be able to produce enjoyable music – a task practically anyone is capable of… as long as they approach the task with a certain mindset. Let me explain. 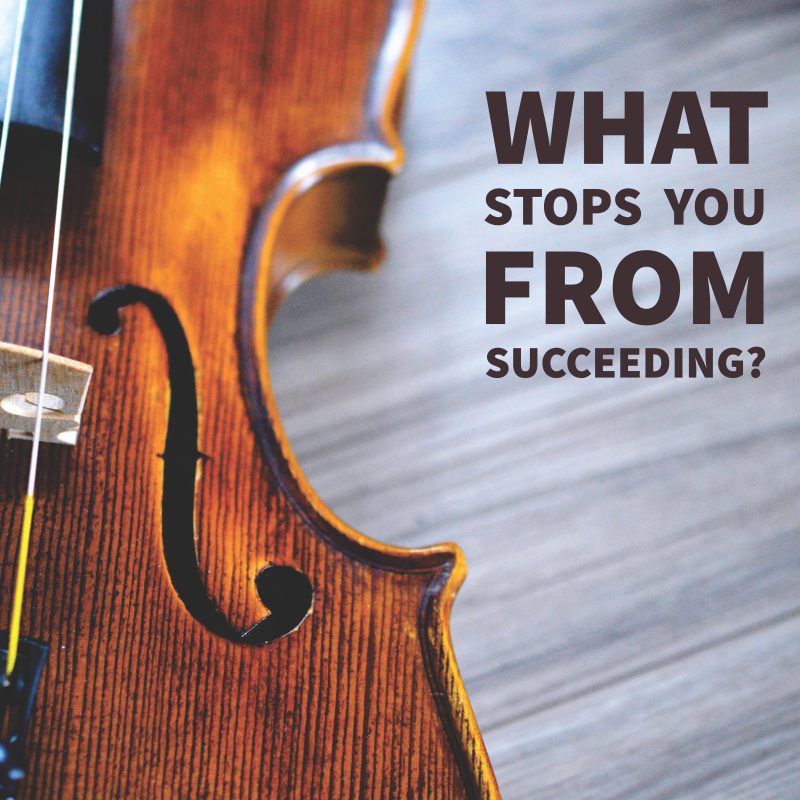 “What Stops You From Succeeding?”

I was playing tennis the other day with my wife on the grounds of UVA in Charlottesville, VA, when I stumbled across an old style water pump. This may be strange, but it made me think about how getting water out of a hand pump can paint a surprisingly accurate picture of how to accomplish a goal. Have you ever tried using an old water pump? If not, you’re probably familiar at least with what they look like and maybe even how they operate. Without getting into the science behind the pump’s operation, let me draw the analogy. The goal: get a drink of water from the pump. The method: move the handle up and down. Sound simple enough, and it really is. However, if you were to move the handle in an up and down motion once, you’d get approximately zero ounces of water. Move it twice, and you’d start getting flooded with zero ounces of water. (I apologize for the sarcasm) Ok, so what about 3, or 4, or even 5 pumps of the handle? It’s very likely that you could pump for quite a while and still produce nothing. To the inexperienced water pumper, the pump would seem broken. After all, you’re using the right method – you’re pumping the handle, but no water is coming out. In fact, you’re probably just getting even thirstier from all the work you’re putting in! “Why am I standing here pumping away at this thing in the first place? It isn’t working! I’m getting nowhere! I don’t even want water anymore!” But you keep going.

Just then a few drops start falling from the spout… they’re dirty. Gross. You can’t use that water for much of anything… it’s not at all what you had hoped for, but it is something. So you press on and the water starts to clear up. The drops of gross water turn into a small stream of something that appears drinkable. So what do you do when you start to see that thirst-quenching trickle of water? You let go of the handle of course and bend down to take a drink. That’s what you were after at the start; and now, finally, it looks like it was worth it. But as you let go and start to lean in for a drink, the stream stops! Well, no big deal, just give it another quick pump of the handle, and all will be well. Except when you move the handle, nothing happens. “This can’t be for real! I put in all of that effort, I stop for just a moment, and now it seems like I have to start all over!” This is starting to sound pretty depressing.

By now you see where this picture is going. If you start pumping, and keep pumping, and keep pumping when it looks like nothing is happening, and keep pumping when everyone walking by is asking, “Why is that person pumping that handle? It’s obviously not working. Why won’t they just stop?” eventually those small drips will form a steady stream, and that steady stream will grow into much more water than you ever expected. In fact, once a solid stream of water forms from a pump like this, it actually becomes nearly self-sustaining; needing only a small, infrequent movement of the handle to keep the water flowing. Ah, Results.

You of course see now why I never did get good at the violin. I wasn’t consistent. I’d work hard, then back off, and then give it another try, then wonder why I still couldn’t play well, and so on. I was focusing on the results I wasn’t getting, and they were discouraging.

It’s not enough to want something, or to imagine accomplishing something great. It takes work; and more than that, it takes constancy of effort when you see absolutely no results. It is much easier said than done of course, and I’ve only scratched the surface of this idea. There is plenty of information on this idea, and an excellent book that dives deep into this concept is The Compound Effect, by Darren Hardy. So keep chasing after your goal, press on in the midst of the naysayers and your inward feelings of doubt. After a time the results you imagined will come, and they’ll likely blow your initial expectations away!

Just remember, don’t be frustrated with the results you aren’t getting from the work you aren’t doing.

Daniel Belcher is the owner of Thriveworks Counseling in Charlottesville, VA.

Home » Counseling News » What Stops You From Succeeding? Violins and Water Pumps…